Mark Gress enters the Nine-Eleven Tavern at 11:30 each morning much as he has for decades to prepare Buffalo wings in his kitchen– but these days, everything is a little bit different.

Gress has built a reputation for serving some of the city’s best wings in this workingman’s tavern tucked away on a quiet street in South Buffalo. He has personally prepared every plate of wings since the tavern opened in the early 1980s, and his homemade sauces and unique preparation style – created in a small kitchen that contains two fryers, a char-broiler and a small stove – remain a closely guarded secret he hasn’t even divulged to family members. 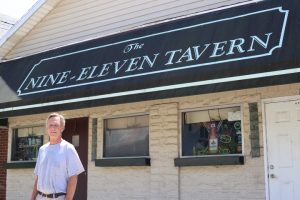 While Gress’ cooking remains the same, the Nine-Eleven’s dining room is dark now. And bottles of hand sanitizer and boxes of wipes line the bar instead of patrons. Gress recently reopened the tavern for take-out orders to feed Buffalo some of its favorite wings during the COVID-19 pandemic.

This is more than Gress or any restauranteur in Buffalo ever bargained for. But this first-generation pioneer of the Buffalo wing has never backed down from a challenge before – and isn’t about to now, either.

When Gress first opened in 1981, employees from the nearby steel plants and factories – including Bethlehem, Republic, and Donner-Hanna Coke – used to flood his tavern after their shifts. Payday was especially popular, as the Nine-Eleven also doubled as a cash-checking service, allowing Gress’ patrons to buy a couple of extra cold ones with their new earnings.

But within a year of opening, most of those plants closed – and the Nine-Eleven’s customer base disappeared. So Gress went back to the drawing board, hosting shuffleboard leagues in his bar, catering events, and perfecting the wings that would eventually be known all over Buffalo. Not only did Gress survive; he ultimately thrived, selling more than 200 pounds of wings a night prior to the pandemic.

Gress’ past experience is helping him navigate these uncertain times, too. 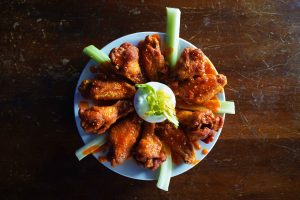 “You need to sit down, and think it out, and figure out how to solve the problem,” Gress said. “If that doesn’t work, start over and think it out again. Use what you have, adapt to what’s going on, and always keep giving them quality product, consistently at a reasonable price.”

There is much outside of Gress’ – or anyone’s – control these days. But Gress still takes enormous pride in what he can control – the wings he cooks every night that have a presentation style and flavor unlike anywhere else in Buffalo.

“If I didn’t take pride in it, they wouldn’t be what they are. Any one can slap some Frank’s Red Hot on some wings and throw them on a plate,” he said.

Gress’ story – of never backing down, finding ways to adapt and persevering in trying times – reflects the personality of the city he serves.

Brian Hayden served as Visit Buffalo Niagara\\\'s Communications Manager from 2014 to 2020 after working as a newspaper reporter and social media manager in Northern New York. Tweet to him @brian_hayden.