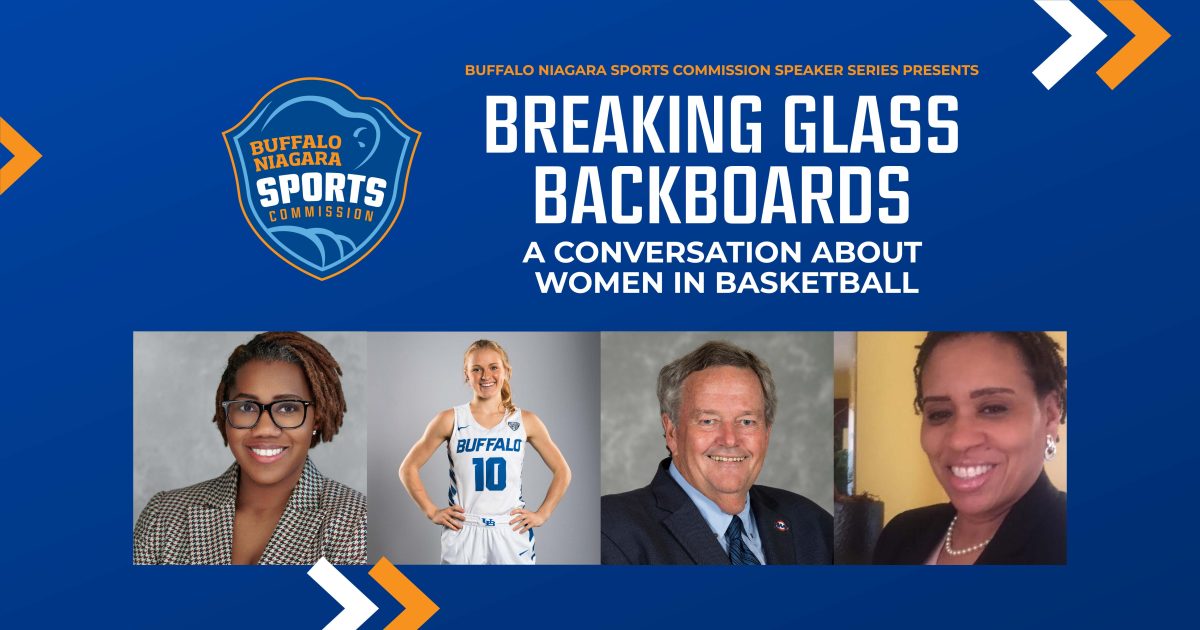 Breaking Glass Backboards:
A Conversation About Women in Basketball

This event is free to attend, but registration is required through the form below.

Doors to the event will open at 2:30pm | Programming begins at 3:00pm
Light refreshments will be served at 4:15pm.

Please RSVP as soon as possible and secure your spot. Contact Lauren Vargo at 716-218-2920 or vargo@buffalosportscommission.com with any questions. We hope to see you on March 16th!

Keia Clarke is Chief Executive Officer of the New York Liberty, where she leads and manages all business aspects of the Liberty organization, including strategic planning, revenue, P&L and operations. Additionally, Clarke works with stakeholders on key elements of team business, including growing the fan base, maximizing sales and fan engagement, and improving business performance.

Hanna Hall grew up in Hamilton, ON, Canada and played for Canadian National Team during summers leading up to college. Hanna won a bronze medal for Canadian National Team at the 2017 FIBA World Cup in Italy and competed in the 2019 Pan American Games in Lima Peru with Team Canada. She attended University at Buffalo on scholarship, obtaining a degree in Psychology, with minors in both Nutrition, and Non-Profit Leadership. Her career highlights as a bull include a first-ever Sweet 16 appearance freshman year. As a sophomore, Hanna won a Conference Championship, and first-team honors, prior to a round of 32 NCAA Tournament run, and set new career-highs in junior and senior seasons.

Hanna earned academic All-MAC honors each year as a Bull, and was a student-athlete rep on the NCAA working committee for two years. Over time as a Bull, she became a large advocate and voice for mental health and appeared on ESPN’s Outside the Lines, speaking engagements, and keynotes, with goals of normalizing conversation around mental health as student-athletes.

A proven leader in intercollegiate sports, event management and sport law for over three decades, Richard J. Ensor was named the third Commissioner of the Metro Atlantic Athletic Conference in August 1988. Ensor has provided leadership through a national pandemic that shuttered sports in 2020 and through resulting financial and operational challenges as intercollegiate competition remerged in 2021 in an environment of bubbles, testing and arenas with no fans.  In a period of continuing conference realignment in intercollegiate athletics, legal and equity challenges and a pending revision of the NCAA Constitution and Bylaws, Commissioner Ensor continues to provide the MAAC with strong guidance and advocacy for its interests within the NCAA.

Generally considered the most talented (and most highly recruited) female basketball player ever produced by Western New York, Yevette Angel starred for Sister Maria Pares for four seasons at Sacred Heart Academy. She also starred for the East squad at the National Sports Festival in Syracuse for three years running, Yevette was recognized as a Parade Magazine Second Team All-American in 1981.

Yevette’s exploits led to a full scholarship to Ohio State University. She graduated in 1985 as the school’s fourth all-time leading scorer with over 1,400 career points, and as point guard, led the Lady Buckeyes to four straight Big-Ten titles and a final eight appearance in the NCAA tournament her senior year. Yevette was duly honored as an All-Big Ten selection for three seasons, and as an All-American.

After playing professionally one season in Spain, coaching beckoned. Yevette was appointed full-time assistant coach at Notre Dame University in 1989, and she utilized her talents and intimate knowledge of the game to help spark a turnaround in the basketball fortunes at that esteemed school. Her experience in that role landed her a coaching position with the Sacramento Monarchs in the fledgling WNBA.

Sahar Nusseibeh (pronounced new-SAY-bay) was officially named the 10th head coach in Canisius women’s basketball program history on July 23, 2021. A long-time assistant coach with 12 years of Division I coaching experience, Nusseibeh takes over the Canisius program after spending the previous two seasons (2019-20, 2020-21) at Miami University where she also held the title of defensive coordinator.