It’s standing room only at Freddy J’s BBQ, as customers have filled all eight seats along the counter as they chow down on specialties like fried chicken and red velvet waffles. Behind the counter, owner Fred Daniel chats and jokes with his patrons as pots of rice, macaroni and cheese and collard greens simmer on the six-burner stovetop behind him.

Blues music plays in the background as Daniel’s customers eat. “I got the blues since my baby left me,” Daniel croons, then laughs, as do his customers. Daniel, who often greets his guests with a handshake, describes the experience at Buffalo’s smallest sit-down restaurant as “the art of intimate cooking.” 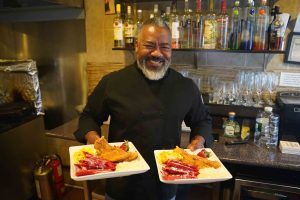 “It doesn’t matter how small your place is. It’s that human connection between you, the customer and the food,” Daniel said. “You have to treat every customer like they are a Michelin star judge.”

That six burner stove is “like a gift” for Daniel, 51, who grew up on a farm without electricity in Liberia, where his family cooked on a wood-burning stove and fetched water from a nearby river. A trip with his stepfather to the capital city of Monrovia as a child where he watched “Casablanca,” ate “the biggest burger” and drank a Coca-Cola left an indelible impression on him.

Daniel got his chance at age 13, initially helping relatives run their restaurant in Long Island, before moving to Buffalo to study at Buffalo State College. He eventually crossed paths with beef on weck magnate “Charlie the Butcher” – Charles Roesch – who hired him and taught him the restaurant business.

Daniel eventually struck out on his own, running catering out of his house before opening on Grant Street in 2013. Pictures of his idol, Humphrey Bogart, line the wall of the restaurant, and a wall-sized mural of Daniel greets customers outside. The menu is a mix of soul food, barbeque and Liberian influences – from the seasoned fish to the collard greens cooked with onions – flavors he picked up from watching his grandmother cook on the family farm. 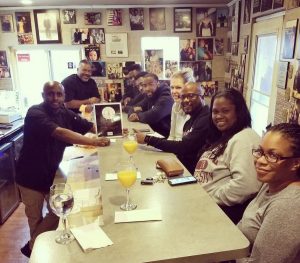 “The ingredients she used, luckily I can find in Buffalo,” he said. “You want people to say ‘I can only get that flavor at Freddy J’s.’”

Daniel is just getting started on Grant Street. An enclosed patio for additional customer seating at Freddy J’s is in the works. And he plans to open a 50-seat blues bar – The Blue Note – in a building next door later this year.

He hopes the experience at his restaurant mirrors and embodies a visitor’s broader experience in Buffalo.

“You want the customer to feel that we are part of Buffalo and that Buffalo is a part of us,” Daniel added. “In this city, we are all one. When a customer comes in here, I want them to feel that warmth.”