Memories and images of Burma adorn the walls of Lin Restaurant in the city’s Riverside neighborhood. Replicas of thatched roofs extend over most of the tables. A mural of fishermen in straw hats boating on Inle Lake lines the back wall. And a wall-sized photograph of children walking through a refugee camp surrounds the restaurant’s exit door.

“Burmese people ask me, ‘Why do you put that picture there?’” owner Khin Maung Soe said. “Every day it reminds me that we came from there. We can show our customers where we’ve been.”

As a teenager in 1988, the Burmese army forced Khin and his family from their home, part of a sweeping persecution of the Karen ethnic group in that country. They fled to a small village on the Burma/ Thailand border; Khin spent years working at restaurants throughout Thailand before settling in a United Nations Refugee Camp in 2002 for six years.

He moved to the United States in 2008 in New York City, then to Buffalo after a friend told him that rent was cheaper here. Khin saved his money working as a dishwasher and other odd jobs and opened his first grocery store on Grant Street in 2010, followed by the current restaurant and store in 2014. 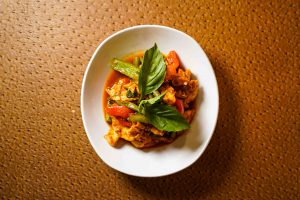 Khin prepares the restaurant’s specialties, some of which are longstanding family recipes, the way they would be made in Burma; most dishes range from $9 to $15. Running a restaurant and grocery store keeps him working every day of the week, sometimes up to 12 hours a day.

Khin hopes his story – from arriving in Buffalo with little money to operating two successful businesses just a decade later – can inspire other Burmese who have moved here of the opportunities that exist.

“When I arrived here, I became free,” Khin said. “I got a new life. I could realize my dream.”