It’s taken UB’s Arts Collaboratory no time to establish its presence both in Buffalo and beyond.  Its latest coup is striking a working relationship with New York-based gallery owner, Stefania Bortolami and British-born painter, Cecily Brown.  According to the Collaboratory’s director, Bronwyn Keenan, “During the time we’ve all had to work and create remotely, I’ve had the opportunity to reach out and tell Buffalo’s story to a number of people previously unfamiliar with the richness of the City’s cultural heritage and growing reputation as an art hub.”

Cecily Brown in her studio

That strategy is working, with the Bortolami Gallery’s “Artist/City” behind a major mural project that is being led by Brown. “Artist/City” is an experimental programming initiative that pairs an artist with an American city. Taking place in unconventional settings for longer durations than the standard gallery exhibition, these site-responsive projects grant artists freedom to present their work according to their own creative vision. Buffalo is one of those fortunate cities.

If you’re not familiar with Cecily Brown’s work, that’s about to change. According to critic Allyssia Alleyne, Brown is “one of Britain’s most revered living artists.”  The painter, who has made New York City her home since the mid-90s, is represented in major collections including the Museum of Modern Art, The Whitney Museum of American Art, the Pompidou in Paris, and the Tate Modern in her native London.  She is also in the collection of Buffalo’s Albright-Knox Art Gallery, which is when she first made the trip to the Queen City. Most recently, her large-scale work has been on exhibit at the Metropolitan Opera’s Gallery Met at Lincoln Center.  The mural project in Buffalo will be a first for her, and according to Brown, “Working big is fun.”

To execute this project, Keenan has assembled a group of participating partners that represent a variety of disciplines and experience. “This project brings together local painters, dancers, musicians, poets and storytellers, UB students and a group of aspiring young artists from the Buffalo Academy for Visual and Performing Arts (BAVPA), where the mural will be completed.”  The partners include Naila Ansari, a SUNY Buffalo State assistant professor of theatre; Pam Glick, a widely exhibited Buffalo-based painter; George Hughes, a UB professor of art; Jodi Lynn Maracle, an Indigenous artist and performer; Jae Skeese, a hip-hop musician and painter; Sara Zak, a UB MFA student; painter Julia Bottoms; and a group of BAVPA students selected by the school’s faculty.  All participants will receive a stipend of $2,500, funded by Stefania Bortolami.

The Space Between, 431 Ellicott St. / Photo by UB Arts Collaboratory

The team began with virtual brainstorming sessions that started on April 16th and will continue through May, with Brown arriving in early June at The Space Between, the Arts Collaboratory’s downtown incubator space at 431 Ellicott Street. According to Brown, the team will discuss Buffalo’s growing legacy of public art, its cultural heritage, and the rich tradition of Mexican muralists and their influence on modern painters.  All of the group’s source material will be on public display at The Space Between, which the community is invited to view.  The completed mural will be installed on the side of the Arts Building on the grounds of the BAVPA at 450 Masten Avenue.

“This is a long-term commitment and Cecily has said that she’d like to return annually,” said Keenan. “We are fortunate to welcome such a world-class talent to the university for an extended project in our community as part of our Working Artists Labs.” 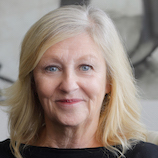 Kathleen Rooney is the principal of Kathleen Rooney Communications, a creative PR/Marketing firm with a diverse roster of clients including hospitality, tourism, culinary, legal and business development organizations.