In any other year, on a weekend evening, the streets of the Buffalo Theatre District would be bustling, the marquees lit and the surrounding restaurants filled with theatre-goers. But, while their doors are closed, Buffalo’s diverse theatre companies are taking their talents and creative productions online for you to enjoy from your own home. So order some takeout, dress up in your theatre attire and get ready for the entertainment you’ve come to expect from Buffalo theatre. Here are 10 ways you can take in a show in November: 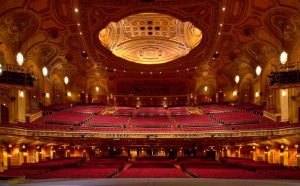 Watch your hometown CSz Buffalo players compete for virtual glory, all from the comfort of your own home. The next event , Ha-ha-Halloween, is scheduled for October 31. Registration is required through Zoom and limited to the first 100 guests. Check back as we CSz adds more digital matches to their schedule.
October 31 at 8pm / Register at CSzBuffalo.com

This lyrical Irish love story is the winner of the Los Angeles Drama Critics’ Circle Award (Best Play) and the Canadian National Regional Theatre Award. The professionally-produced, fully-staged, theatre-in-the-round performance will be filmed at Irish Classical’s home, The Andrews Theatre, and will be available for streaming October 16 to November 1, 2020. Tickets are affordably priced at $15-$25.
Ending November 1 / Tickets for the online event at IrishClassical.com

The first in their Five Staged Readings series, Bar Mitzvah Boy will be presented online as a professional video production. A non-observant Jewish grandfather and successful divorce attorney decides he needs to have a Bar Mitzvah ASAP and finds his faith during study with a Rabbi who seems to be losing hers. A heartfelt comedy/drama that explores faith, religion, and what it means to be part of a community.
November 5-25 / Tickets for the online event at JewishRepertoryTheatre.com

Purchase of admission to the MusicalFare Live Streams enable you to watch the event as a Live Stream on November 6 (Colleen Williams Quartet) and November 12 (Zachary Noah Piser and Adam Rothenberg) or as a recording anytime up through Friday, November 20th in case you’re unavailable on Live Stream night. Presented in association with JazzBuffalo.
November 6 & 12 at 7:30pm / Stream current and past episodes at MusicalFare.com

Alleyway Theatre’s first ever Digital Theatre Festival features the digital category winner and finalists of the 2020 Maxim Mazumdar New Play Competition. Selected from over 150 entries, these short plays stand out as the best new works written for this time.
November 6-22 / Tickets for the online events at Alleyway.com

What is it like for a woman when her husband becomes The President of the United States — and she is suddenly thrust into the spotlight?
O’Connell & Company presents the thought-provoking play “TEA FOR THREE: Lady Bird, Pat & Betty”
by Eric H. Weinberger & Elaine Bromka. The play is filmed in the historical setting of The Theodore Roosevelt Inaugural National Historic Site.
Ending November 8 / Tickets for the online event at OConnellandCompany.com

Live from the West Side: Laura Benanti by Shea’s Performing Arts Center

Shea’s Performing Arts Center is one of a select group of theaters participating in a three-part virtual concert series. The November 14 edition features Tony Award-winner Laura Benanti.
November 14 / Tickets for the online events at Sheas.org

I’ll Eat You Last: A Chat with Sue Mengers by Kavinoky Theatre

This filmed version of I’ll Eat You Last takes you into the 1980’s fabulous Hollywood world of super agent to the stars, Sue Mengers. Through the eyes of director Lynne Kurdziel Formato and filmmaker Brian Milbrand, this true Hollywood story will be filmed on the stage of the beautifully renovated Kavinoky Theatre, and edited-resulting in a mix of live theatre and Hollywood film.
Beginning November 27 / Info for the online event at KavinokyTheatre.com

Each week, Lancaster Opera House firector David Bondrow will host Lancaster Opera House performers and other guests at “brunch” for a mix of theater discussion, themed retrospectives, and monthly productions of radio dramas and original musicals.
Sundays at 12pm / Stream current and past episodes at LancasterOpera.org